Click on image to view better.
Happy Shopping!
Posted by Doris' at 6:12 PM No comments: 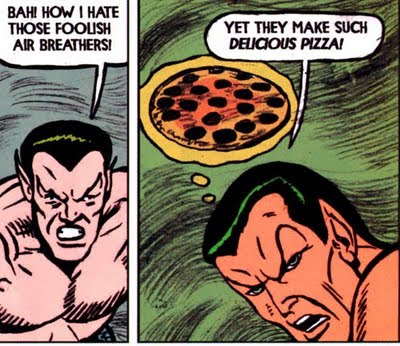 These Fridays keep coming quicker and quicker....... I just have to remember to eat the pizza slowly.....
Have a great fine settimana! 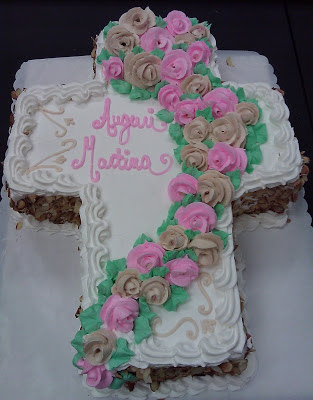 This time of year with all the Confirmations, Communions and other religious occasions, I get nostalgic of when my family celebrated my sacraments.  I remember celebrating my communion at the Ground Round and receiving a Timex wax from my Aunt and Uncle.  These moments are important  beyond the faith as they help establish our foundation as a human being growing up in such a complex world. But my belief in something that is bigger than this life keeps me grounded.  I am grateful for my memories.  What do you remember about your Sacraments?

What will be on your pizza tonight? 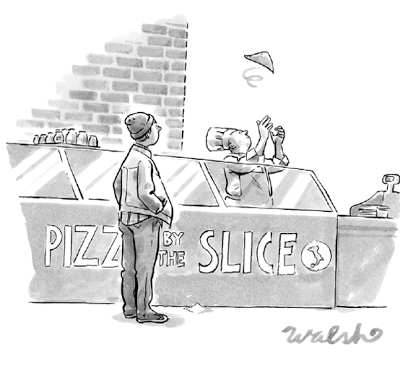 Have a great night with friends and/or family while enjoying some good pizza.

1.
Lay flank steak on a baking sheet and season on both sides with salt. Put a handful of peppercorns on a cutting board and crush them by pressing firmly with the bottom of a sauce pan (or use a spice mill or mortar and pestle to obtain a very coarse grind). Measure 1 tablespoon of crushed pepper and sprinkle on both sides of steak. Strip leaves from rosemary. Sprinkle meat evenly on both sides with rosemary and garlic slices. Drizzle with 4 tablespoons olive oil, then massage with your hands to distribute, pressing pepper, rosemary and garlic into surface. Leave at room temperature for an hour (or refrigerate for several hours and bring to room temperature before proceeding).
2.
Meanwhile, heat oven to 450 degrees. Place a cast iron skillet large enough to hold the steak (or a heavy roasting pan) on the upper rack. Let skillet heat for at least 30 minutes.
3.
Carefully put flank steak in pan and close oven door. After 5 minutes, flip the steak (it should be well browned on the bottom) and cook just until juices appear on surface of steak, 3 to 4 minutes more for medium-rare meat. (Alternatively, cook steak under broiler about 2 inches from heat.) Remove steak and let rest on a carving board for 10 minutes.
4.
Cut meat on a diagonal, against grain, into thin slices. Arrange sliced meat on a large platter and surround with arugula. With a vegetable peeler, shave about 2 ounces of cheese over arugula. Drizzle with a little olive oil and garnish with lemon wedges.
YIELD
4 to 6 servings
Alternative cuts of beef other than flank steak can include:
London Broil or Ribeye
Full article at nytimes.com 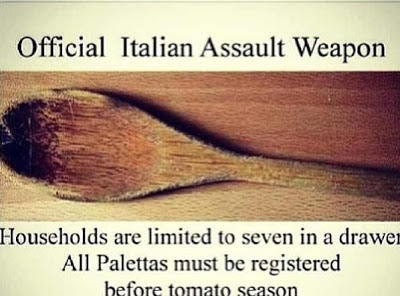 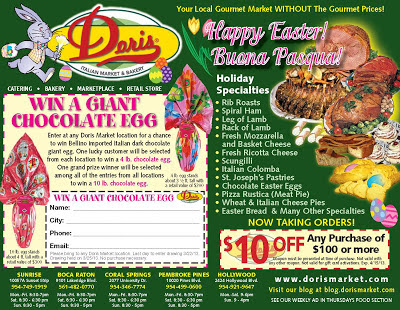 It's that time of year again when 6 lucky winners receive a Giant Chocolate Easter Egg.  Drop off your entry form at any Doris Italian Market location.

For those that may have been following this blog, you may have read that I love comic books, or to sound much more sophisticated; sequential art.  Anyhoo, I stumbled across this recipe done in comic strip format from "The Veg Box Diaries" blog and thought I would share. 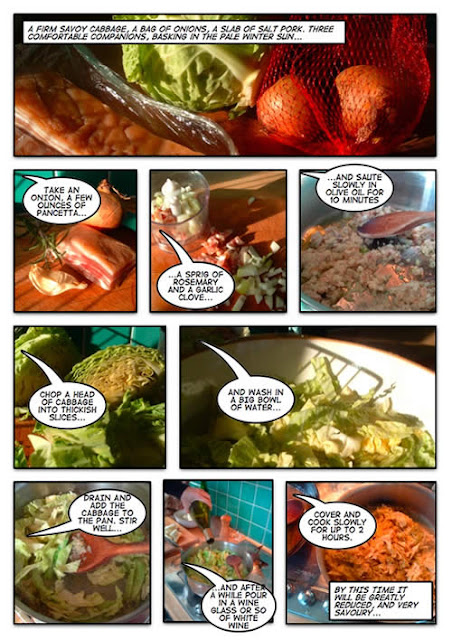 Just came across this image and a brief glance made me think I was looking at Jeopardy's Alex Trebek.  Do you agree?

Sunday Treat.... Who cares if it's cold outside!? It's Nutella!

Thanks to our friends at nutelladay.com for posting this quick and delicious recipe.  I couldn't wait until it warms up for this.  This is a "have now" recipe!

Mix together 300 grams (10.58 oz.) each of milk and Nutella with an immersion blender until the Nutella has dissolved, then pour into popsicle molds and freeze. Delizioso! 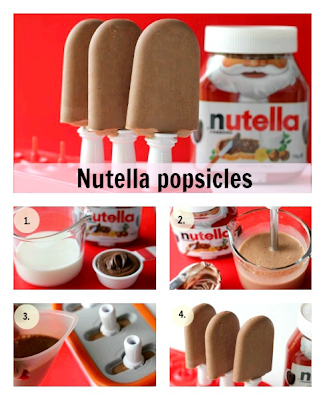 With the resignation of Pope Benedict, the first papal resignation in about 600 years, we saw something no one has witnessed in quite some time which included the relieving of the Swiss Guard. Rites and traditions in the Catholic religion are deeply rooted.  Here is what to expect during the selection process for a new pope, as well as other rituals performed related to the Papacy.
Secret ballots. Black and white smoke. Tapping the forehead of the dead pope with a hammer. There are many elaborate rites and traditions involved when electing a new pope, some dating from the Middle Ages, others as modern as sweeping the Vatican buildings for electronic listening devices.
Vote Or Starve
Back in the 13th century it took almost three years to install a new pope. After the death of Pope Clement IV, who died in 1268, church officials became involved in a bitter political struggle and many refused to vote. Finally, in effort to break the stalemate, the cardinals were fed only bread and water. The roof of the building they were staying in was removed. The desperate measures worked, because a new pope was soon elected.
In the age of the bullet-proof popemobile, electing a new pope has gone modern. The Sacred College of Cardinals, the electoral body which chooses the pope, will continue to meet and vote in the Sistine Chapel. Breaking with tradition, though, they won't be locked in. Instead they'll live in nearby Casa Santa Marta, new hotel-style facilities in the Vatican, and will be bused the short distance to the chapel where Michelangelo painted the ceiling and Last Judgement frescoes.
Knock Three Times
When the Pope dies, the officials that were part of the papal administration no longer rule. The governing of the Vatican is taken over by the Camerlengo of the Holy Roman Church, or Chamberlain of the church. The camerlengo supervises all aspects of what goes on from the the death of the pope to the election of the next pope. His responsibilities include the papal funeral and preparations for the conclave.
The camerlengo's first duty is to perform a medieval ritual. At the deathbed of the pope the camerlengo takes a silver hammer and lightly taps on the pope's forehead three times, calling him by his Christian name. When there is no reply, he announces to those present that the pope is dead. The camerlengo also removes the Fisherman's Ring from the Pope's finger. At the first meeting of the Sacred College the ring and papal seals are broken.
Holy Smokes!
Is that black smoke coming from the Sistine Chapel at the Vatican? One of the most famous traditions of the papal succession ritual is the appearance of smoke from the chimney of the conclave room. The eligible cardinals conduct a secret ballot until someone receives a vote of two-thirds plus one. The ballots are burned after each vote. Black smoke (straw is mixed with the ballots) indicates a failed ballot, white smoke means a new pope has been elected. Since the cardinals meet in isolation, it's the only way to inform the public about the proceedings.
During the coronation of a new Pope, flax is burned and the words Sic transit gloria mundi, "Thus passes the glory of the world," are recited. It's meant to represent the temporary nature of earthly glory. Popes come and go, but the papacy, one of the world's enduring institutions, continues to provide spiritual guidance to over a billion Catholics.
Italian Vocabulary List: The Vatican

My only concern is wouldn't the cheese stick to each other? Thoughts anyone?