Making Ice Nice Since 1949: A Brief History of the Zamboni by Scott Allen - May 14, 2010 -
The technical name for the funny looking machine that refurbishes the ice at hockey and figure skating rinks is an ice resurfacer, but you probably know it better as a Zamboni. Here are a few points you may not have known about the leading brand in the industry for more than 60 years.

Who invented the Zamboni?

Frank Zamboni, the son of Italian immigrants, invented the first ice re 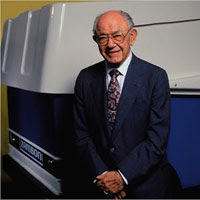 surfacing machine in Paramount, California, in 1949. Zamboni initially wanted to name his company the Paramount Engineering Company, but the name was taken, so he used his family name instead.To fully appreciate Zamboni’s genius, it’s worth delving a little bit into his past. After working together at an auto repair shop in Southern California, Frank and his younger brother opened an electric service business that specialized in building and installing large refrigeration units for the dairy industry. The Zambonis expanded their business to meet the demands of the produce industry by building a plant that produced block ice, which was used to keep perishable goods from spoiling while in transport. When the demand for block ice began to wane as refrigeration technology improved, the brothers used their ice-making expertise to capitalize on the growing popularity of figure skating by opening the Iceland Skating Rink in Paramount in 1939.

What was the inspiration for the Zamboni?

Maintaining the quality of an ice surface that could accommodate up to 800 skaters was a labor-intensive and time-consuming task. Iceland Skating Rink workers walking behind a scraper being pulled by a tractor scooped up the shavings, sprayed the ice with water, and squeegeed the surface. According to the Zamboni website, the process took more than an hour. There had to be a better solution, Frank Zamboni thought. He was right.

Most of Zamboni’s early prototypes were built of war surplus parts. Zamboni applied for a patent for his Model A resurfacer, which was built and tested in Paramount and included a hydraulic chamber from a Douglas bomber, in 1949. The look of the machine hasn’t changed all that much in 61 years.

How does a Zamboni work?

As the machine moves over the ice, its sharp blade shaves a thin layer from the surface. A rotating horizontal auger collects the shavings and funnels them to a rotating vertical auger, which moves them into a large bin called the snow collection tank. Water is released from the back of the machine to clean the ice before it is collected by a squeegee, vacuumed, filtered, and returned to the wash-water tank. Clean water from a separate tank is sprayed out of holes in the back of the machine and smoothed over with a towel.

How did the Zamboni become popular?

A big breakthrough for Zamboni occurred in 1950, when figure skater Sonja Henie ordered two machines for her traveling tour. Arthur Wirtz, the owner of Chicago Stadium and the man responsible for presenting Henie’s tour, reportedly told Frank Zamboni that he was concerned wi 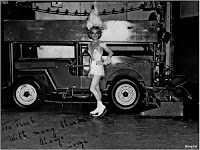 th the novelty of the machine. “People will stay in the stands and watch it and not go down to the concession stands,” Wirtz said. Charlie Brown would agree. The Peanuts character said a Zamboni clearing the ice is one of the three things in life that people like to stare at, along with a crackling fire and a flowing stream. (Peanuts creator Charles Schulz was born in Minneapolis and included many references to Zambonis in his cartoons.)
The Boston Bruins became the first NHL team to use a Zamboni in 1954 and other teams eventually followed suit. In 1960, Zamboni supplied six ice-resurfacing machines to the Winter Olympics in Squaw Valley, California.

What other machines did Zamboni invent?

In the early 1970s, stadiums throughout the country began installing

AstroTurf in place of natural grass. While the synthetic surface required minimal upkeep, rain would collect on the surface, rendering it unplayable. The manufacturers of AstroTurf approached Zamboni in hopes that he could design a machine that would alleviate this problem. The result was the Astro Zamboni machine, which removed rain water from AstroTurf and prevented unnecessary rain delays. Zamboni developed two more machines for use on AstroTurf, one that helped roll and unroll the surface and another that removed paint from it.

How many machines has Zamboni built?

Zamboni has manufactured about 10,000 machines. Today, the company’s two factories produce about 200 Zambonis a year.

Who else manufactures ice-resurfacing machines?

While most of Zamboni’s competitors have been flushed away over the years, the Resurfice Corporation in Ontario, which has been operated by the Schlupp family for more than 40 years, continues to produce its Olympia model. The company boasts a handful of NHL clients and provided electric ice resurfacers for the 2010 Winter Olympics, providing national attention that the company would probably like to forget. The electric machines failed to properly clean the ice during the men’s 500-meter speedskating event, causing a lengthy delay. According to a 2009 article in the New York Times, the Schlupps are used to hearing their machines referred to as Zambonis, while the Zamboni family is wary that the familiarity of the name will lead to the company losing its trademark protection.

Are there any famous Zamboni drivers?

Al Sobotka, who has driven the Zamboni and cleaned up octopuses at Detroit Red Wings games for more than 30 years, is one of the more famous Zamboni drivers. In 1999, the Zamboni company sponsored a Zamboni Driver of the Year contest to celebrate the 50th anniversary of the machine. Jimmy Macneil, who drove the Zamboni at the arena in Wayne Gretzky’s hometown of Brantford, Ontario, won the contest and the right to drive the Zamboni at the All-Star Game in Toronto. “It’s a thrill right up there with getting married and having children,” said Macneil, who drove Zambonis through the streets of Canada in the four months leading up to the 2002 Winter Olympics to raise money for the Canadian Hockey Association’s grass-roots programs.

Have there been any Zamboni accidents?
Yes, including the one that killed Carla’s husband, Eddie LeBec, on the sitcom Cheers. In 2008, a Calgary man almost lost his leg after it got trapped in a Zamboni as he was stepping down from the machine. It took firefighters half an hour to free the man’s leg before he was transported to the hospital in serious but stable condition. According to the Zamboni website, Frank Zamboni crashed into the highway median while driving a Model C machine he was delivering to Berkeley Iceland. And while they managed to avoid a crash, two employees of a Boise ice skating rink were fired after driving a Zamboni through a Burger King drive-through in 2006.
To view actual article click HERE.
Posted by Doris' at 12:00 AM