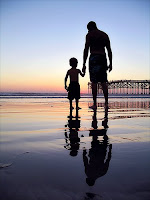 June is here and now we must pay our respects to the men who become the first heroes to their young. Fathers are the sometimes unsung heroes who sacrifice much to ensure a future for their children. It's like when Bill Cosby describes how a father teaches his son how to run, throw, catch a ball and supports him through school and the kid eventually becomes a professional ball player. The moment he scores his first touchdown on national television, he looks in the camera and says, "Hi Mom!"
Yes, it happens but truthfully, a father's reward is being able to see their children do well. That is their thanks. They are able to say, "That's my child receiving that award. That's my child making the winning shot." I know growing up, I would always seek the praise of my father and I always got frustrated when I wouldn't get it or at least not enough. But the truth was that he was bragging to everyone about his kids. When we are teenagers, we think we know it all or at least enough to hang with the adults, but to this day, I am still learning from my father.
A father's relationship with his children is truly unique. There comes a crossroad when a father not only teaches, but also learns from his children. It is like an update which brings them up to speed on the goings on in society. I think that is truly important because social norms have evolved so much. My parents are Sicilian immigrants. The culture and traditions they have contain valuable lessons to be learned but in today's world, some of these lessons must be perforated to allow current sociological patterns in so these lessons can be compatible in today's world. And believe you me, we need old school lessons.
But this perforation, if allowed by the old school individuals themselves (like my dad), creates a great opportunity for parent and child. It gives the parent the opportunity to view a situation on a broader scale and be able to be more objective before coming to a conclusion. This opportunity allows for acceptance and understanding and bridges the gap between generations due to social changes in belief and thought. We all can play tough, but deep down, our fathers' blessing is a constant desire and when he can look at you and be proud of who you are and/or what you do despite his own opinions/beliefs; well that is a moment in your life that will be remembered to garner strength, confidence, and wisdom.
Witnessing my father adapt to today's social changes and searching for the truth beneath everything has made me proud. Don't get me wrong, my dad is still old school and still has his convictions, but when it comes to his kids, he knows how he raised us and as long as we are honest with ourselves and him, he takes the time to look at the world through our eyes and at times, it's like seeing things for the first time. He has gained a new appreciation for things that have been foreign to him for so long. He has learned tolerance of the things he cannot change which in turn has allowed him to accept these things.
Because of this and so many other reasons, we at Doris Italian Market wish to dedicate the entire month to Fathers. Like the previous month, which was for Mothers, we will have videos, recipes, articles, anecdotes, etc. And as usual, we invite anyone to share with us. So to begin, I would like to provide a beautiful song from Elton John that my dad likes since it came out. It has many meanings and for me, it represents the blessing that a father experiences when he can be proud of his child for being just that, and express it while he can. Enjoy and stay tuned for many for things devoted to dads on this blog this month.